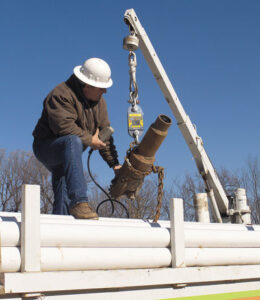 Load testing was completed to comply with Australian Standards. Learn more below!

An end user will use the new Shuttlelift cranes, which measure container weights, to lift pre-cast T-beams at the manufacturing premise in Melbourne’s western suburbs. Previously, load testing was done to comply with Australian Standards. They will also undergo periodic testing to maintain that compliance. In addition, the owner of the cranes linked the services of its mobile crane provider to help with the counterweights.

He also mentioned that the mobile crane provider utilized one of its Franna pick-and-carry cranes to position the counterweights in the super lift tray. The rigging gear and load cell setup weren’t complicated. In addition, the crane technicians monitored the readings and used the load cell to adjust the scale system on the cranes.

Moreover, the Radiolink plus, combined with 120t capacity shackles, was used with the Handheld plus reading device. The rigging team could supervise the load-testing cranes at a safe distance. They used the long-range 2.4GHz version offering a wireless range of 1,000m (3,280 ft). Overall, Nelson said: “The Radiolink plus has been widely covered in earlier case studies, but in every application, its various features are showcased at the coalface of our industry.”

CONTACT THE SCALE PEOPLE FOR WEIGHING EQUIPMENT AND CALIBRATION SERVICES!

Since 1956, The Scale People have earned a reputation as the best service provider for calibrating and repairing weighing equipment in the mid-Atlantic area. Our sales team can help you to find the best weighing equipment for your application. We currently have offices in Columbia, MD, and Newport News, VA, but we offer our services nationwide. Over the years, we have built many satisfied clients from various industries, including pharmaceutical, food and beverage, and government manufacturing. We are a fully ISO/IEC 17025:2017 accredited service company offering calibration for balances, scales, dynamometers, force measurements, test weights, pipettes, and more. All our services have a 100% satisfaction guarantee. We’re only a phone call away at +1 (800) 451-9593. Follow us on Facebook, Twitter, and LinkedIn to learn more about our work.

Categories: Dynamometers | Tags: crane operation, dynamometers, and the scale people
This entry was posted on Wednesday, November 30th, 2022 at 9:48 am. Both comments and pings are currently closed.
Request a Quote