The Scale People: What is a Force Gauge? 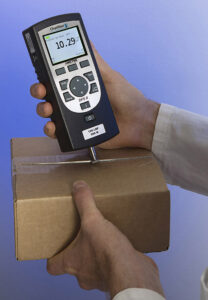 What is a force gauge?

What is a force gauge? Force gauges are measuring tools that measure the magnitude of the force on an object during a test or operation. Various industries use them for test and quality control purposes, including manufacturing. The most common use of force gauges is to complete push or pull tests. This article will explain what a force gauge is, how they operate, and the varieties of gauges.

The Function of Force Gauges

A force gauge deals with the measurement of mechanical forces that are on objects. In addition, these forces usually push or pull forces. They are also known as tensile or compressive forces. One common confusion includes understanding the difference between force vs. weight or an object’s mass. When we measure an object’s weight with a scale or balance, we are measuring an object’s mass. While scales are tools that measure weight or mass, force gauges measure the force that doesn’t always relate to weight or mass.

There are four types of force gauges: digital force, mechanical force, ergonomic force, and hydraulic force. Primarily, they are mechanical (analog) force and digital force gauges. Mechanical gauges use a load cell or spring to display results on the dial indicator as force conditions shift. Although they are durable, they have a few limitations. They are not capable of holding and sampling values over time. In addition, several gauges are needed to receive various units of measure.

In contrast, digital force gauges utilize a strain gauge or load cell that translates the magnitude of the measured force to an electrical signal that can be calibrated to display directly. While this type of force gauge is slightly more expensive, it can sample, record, and store data on measurable values over time. As a result, digital force gauges are significantly becoming the tool choice for force measurement.

CONTACT THE SCALE PEOPLE FOR WEIGHING EQUIPMENT AND CALIBRATION SERVICES!

Since 1956, The Scale People have earned a reputation as the best service provider for calibrating and repairing weighing equipment in the mid-Atlantic area. Our sales team can help you to find the best weighing equipment for your application. We currently have offices in Columbia, MD, and Newport News, VA, but we offer our services nationwide. Over the years, we have built a long list of satisfied clients from various industries, including pharmaceutical, food and beverage, and government manufacturing. We are a fully ISO/IEC 17025:2017 accredited service company offering calibration for balances, scales, dynamometers, force measurements, test weights, pipettes, and more. All our services have a 100% satisfaction guarantee. We’re only a phone call away at +1 (800) 451-9593. Follow us on Facebook, Twitter, and LinkedIn to learn more about our work.

Categories: Force measurement | Tags: force gauges, force measurement, and the scale people
This entry was posted on Friday, September 23rd, 2022 at 9:20 am. Both comments and pings are currently closed.
Request a Quote